Cinderella and that Rocker Fella

Many years ago I was a member of a small intimate theatre group called the Castle Theatre company based in Farnham in Surrey. Not as an actor nor as a writer you understand, but merely as a member of audiences who were regularly drawn in by the warmth and excellent productions that far outweighed the surroundings in which they were being performed but which were met by enthusiastic audiences whose presence reached out and drew the cast into performing some of the best theatre that I have seen.

Fast forward now some 50 years and I find myself standing in the small village hall in Axmouth where I await the musical pantomime which I have written for the brilliant young cast of the Axmouth Childrens Theatre group. Just as with the old castle this is a small intimate venue holding at most 50 punters who come to witness and be part of a genuine force in local amateur dramatics. But where all parts are played by children.

I gaze at the hastily erected stage and the basic but more than adequate scenery and a sense of pride courses through my veins as the tribute music to a departed friend fades and the Fairy Godmother (Ellie Sykes) appears to set the scene. Of course the story revolves around Cinderella (the talented Imogen Oldfield) who is downtrodden and plagued by her ugly sisters who are brilliantly portrayed by Lilley Smitham and Caitlin Tooze while their poor mother Violet Bullen aged 11, wait a minute she’s 11, then I realise the oldest member of this cast is only 13. Up steps Zipper, ok so it should be Buttons but this is Pantoland and wow what a stage presence this lad Kieran Jaycock has. This is now all moving along at some pace as we meet Prince Elvis (Elsa Wood) and his sidekick Little Richard (Luca Flint) who are over here to play at the grand ball in Axmania where the prince hopes to find his bride so that he can become the King of rock n roll. Of course this is panto and things go wrong, the great hall burns down cue little Richerd “Goodness Gracious the Great Halls On Fire” and the ball becomes a festival in a tent, in a field and of course in the rain. More nonsenses arrives with Farmer Bills Cowman (Calum Wood) and the rest of the Mangled Up Wurzels perform a short cameo role.

The poor old Baron (Will Sykes) is penniless and defenceless as the two sisters and the baroness bleed him dry with their constant shopping, his only joy in life are his trusty servants the Jedward twins whose idiotic and “random” behaviour keeps us all amused with their version of “Under Pressure- Ice Baby” drawing some of the biggest applause at each performance. The changing of the pumpkin into Cinderella’s fine coach gives the two little Pixies Nieve Hartnell and Isabelle Hilton chance to shine in their own little scene. Of course this is a fairy tale –ish and having lost her silver gumboot in the mud the prince announces that whoever it shall fit shall become his bride and move to Gracelands in the USA, cue more laughter and tears as the sisters arrive with one swimming flipper on each foot claiming it to be an item of footwear worn in the wet (well that’s what it says in Pictionary, sorry the dictionary). Yes it does all end happily but that’s for the future but for now as writer and director of this play I can only praise this cast and backstage crew for bringing the story to life and thank the three very well supported audiences for their appreciation and enthusiasm. When I used to attend the old castle theatre there were many nights when I felt  that I was part of something very special that feeling returned this weekend, well done everyone involved with this theatre group, its where the children are the stars.

ACT would like to thank Axmouth Village Hall Committee for the use of the hall for rehearsals and Blaze Concepts for their excellent website. The shows were dedicated to the memory of the late Norman Owen a founder member of ACT 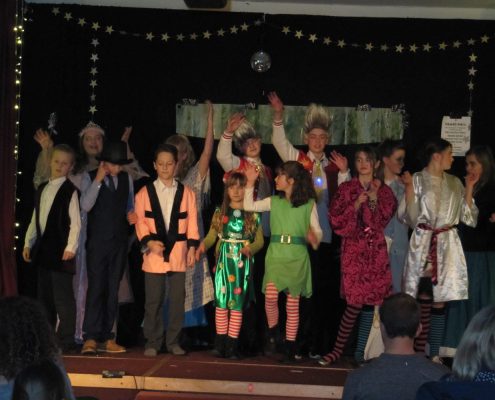 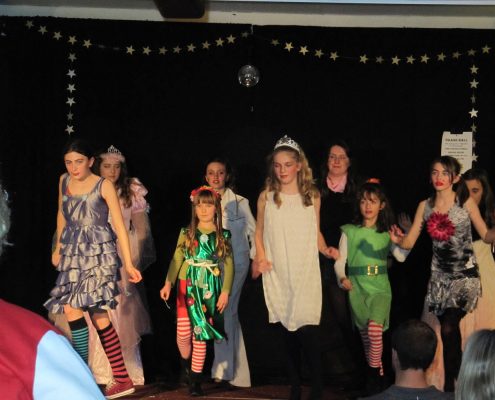 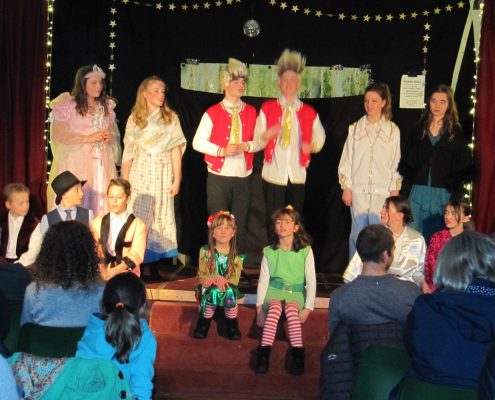 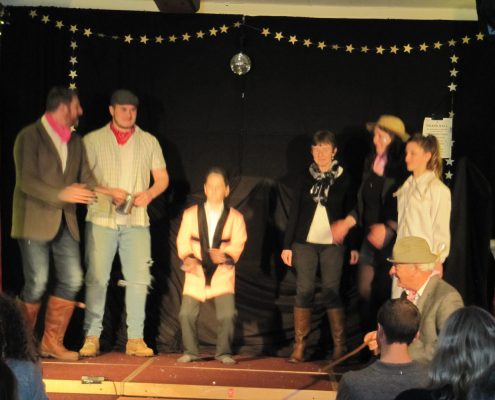